This review of Sacrifice is based on a visit from February 2016. 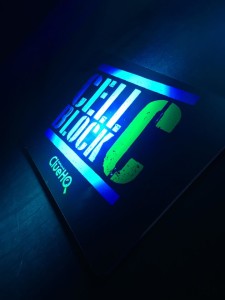 We’d learned of this room back in August when playing The Teleporter, but didn’t have chance to go and play it until much later. I was particularly interested and intrigued for two reasons: 1) The room design was at least partly inspired by my suggested theme, 2) I knew there wasn’t a lot of space left in Clue HQ Warrington so wanted to see how they’d implement Sacrifice:

What may not be immediately obvious from the intro (but will be if you read my suggestion) is that this is designed as a race room. And not just two copies of the same room to see who gets the fastest time; one where you can interact and affect what happens to the other team. Brilliant! So the first thing to do was decide who would be teamed with who. You wouldn’t believe the length at which it was debated, and the systems that were suggested, until eventually we had to very literally draw straws. Finally we were set: James and Richard1 vs. Richard2, me and Paul.

After watching the general health and safety video (which we know nearly off by heart now) we were led through to our room for the specific briefing. There wasn’t much to add to the description above apart from the sting in the tail; when one team escapes the others are instantly ‘sacrificed’ meaning the room ends for them and they don’t get the chance to finish it. In hindsight I’m not sure I’m a massive fan of the idea, as it seems like people should at least have the hour to try and get out, but it certainly upped the stakes.

Picking up my earlier point, possibly the first thing you’ll note about the room is how small it is. In fact the website warns that the game might not be suitable for people with claustrophobia (the first time I’ve actually seen a site mention that it might be an issue, rather than saying it definitely won’t be). And this isn’t just the entrance hall; this room is it for the two or three of you until you get out. Definitely the next thing you’ll notice is how you’re going to interact with the other team, who aren’t very far away. It’s so bizarre, making your environment feel both bigger and smaller at the same time. Then the timer starts, and you’re off.